If you are going to scream out and get excited when you roll a 20 then you need something to make you quiver in fear at the sight of a 1. D&D 4e was missing that balance. Like most people we first tried following the rules as written. They just didn’t work for us. We found that they sorely needed some fumble rules. Here are the rules that we came up with to balance that
When a 1 is rolled on a skill check or attack roll it is considered a failure regardless of any bonuses you might have.  The exact reason can be determined by either the DM or the player, so long as it makes sense for the campaign and everyone agrees.  Maybe the character was distracted while trying to do something complex.  Perhaps their footing wasn’t as good as they thought it was and they nearly slipped. Whatever the cases they have failed and now must deal with the repercussions.  If the 1 is rolled while making a skill check the test is failed in some disastrous way, this is where we really get to be creative and have fun with it.
In the case of an attack roll the result is a miss regardless of any bonuses and it ends your turn.  Characters go directly to the final step of their turn and make any saving throw checks that are required.  Afterwards it moves on to the next person in the initiative, no action points can be spent to keep the turn going.  Of course with any rule there are always exceptions that come from a more specific rule for example; Elvin Accuracy, or the Enchanted Heirloom renown reward would both allow the PC to reroll their 1.  Considering the luck of the average player they will likely get a 1 again anyways.
Two things that do require special mention is blast/burst affects as well as miss affects.  In the case of Blast/Burst you finish out the attack as normal and deal damage as required to those hit by the attack. Then the turn ends as with a normal fumble.  With miss affects the target would take the damage explained by power and then you would move to the end of your turn.
What it comes down to is this basically if your plan is to attack and then move, followed by a minor action and you roll a 1 on your attack roll then you won't get to do the move and minor.  This might not seem like a lot when compared side by side with the old Role-Master effects I’m used too but when you have no fumble affect at all this can be pretty serious.
Now in our home game the PC instantly started looking for the work around.  They would do their minor and move actions first, thus avoiding the majority of the fumble penalty.  I’ll admit this works a good portion of the time but it isn’t always feasible. Often they need to take out the monster in order to get into position to do the minor action. After a while it stopped being an issue at all and they took their turns in whatever order made the sense for the situation and the dangers of a fumble were ignored. 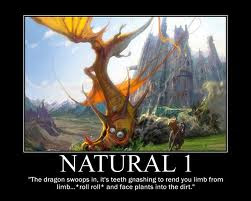 In the end the result of a fumble hopefully will lead to some interesting role-playing situations. This isn’t about punishing the guy who rolls badly.  These are adventures and fate always plays a huge part in any of their stories.  Sometimes it blesses them and other times it kicks them hard when they are down. It is through the highs and the lowers that a characters story grows and becomes even more exciting. Maybe the other characters will give the big fighter a hard time for missing that Orc. Perhaps the Bard just could hit the notes for the song that he was to sing in honour of the King and now must explain the perceived slight.  No matter the cause or the result it should be fun.

Minion Sidebar:
This aspect of our Critical and Fumble rules was born out of my own personal frustrations surrounding minions. I would be standing behind the scene battling against the party with a small army of minions. One more than one occasion I would have planned to have one attack and then move only to roll a fumble.  So they would be stuck there.  Then another would make its attack and score a critical. Woot, the minion does max damage.  How exciting, the minion that does a set amount of damage anyways does the same amount of damage.
We were suddenly faced with the inverse of the original problem.  Now we had a situation where a creature could fumble but without the chance of type of critical.  In order to balance things back out what we have done is that the minions now do double their base damage on a critical hit. If they have any effect that grates them additional damage (ie. Extra damage if within X of its leader) that isn’t doubled.

As a side note I learned shortly after I posted this that there is both an iCrit and an iFumble apps for the iTouch/iPhone.  They are available for 1.99 each at the App Store, and are based on the Critical and Fumble deck from Piazo.
Posted by Randilin Trouple at 11:01 PM