If you missed Session 6 you can read about it here 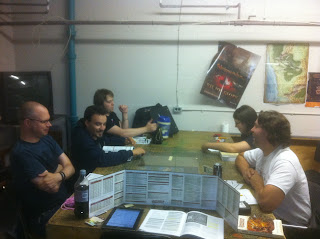 Welcome back to week 7, there are a couple of small changes in our party’s line up once again. Our traditional Bladesinger has been replaced with her Drow doppelganger. it is funny how these two characters never seem to be at the table at the same time. We were also missing the second cleric that had joined us last week. Fondle the Dead's player returned with a new character called Mr. E Meat and yes, his naming skills leave much to be desired.

After a good rest at the Inn of a Thousand Faces the party was ready to get going. They were greeted at the door on the way out by the inn's owners who warned them that things were going to get violent very soon. There was no telling how long they had if they wanted to prevent blood from being spilled in the streets. As a way of thanking the party for how they handled the Charl situation they gave the group two healing potions, wished them good fortunes and sent them on their way.

The party could smell Blacklake long before they reached it. The stench of the place was horrific. When they finally arrived and started walking through it they quickly found that it was now a swamp. Each step they took ended in the tiring process of pulling their boots quickly from the muck before it sank too deeply to be recovered. The effort required was especially difficult for Drow Bladesinger, apparently his slender feet were sinking that much faster. The extra weight on his boots and the energy he had exerted was enough to slow him down going until he could get out of the swamp and clean his boots.

Between the darkness, the mud and the stench, the group had a rough time of it finding the Bandit house they were looking for. But in the end they stumbled across an abandoned and rotting canoe and the fallen tree that lead to the house. At this point we placed the miniatures and rolled for Initiative. I held off on adding the monsters until the party disturbed them.
Darbek, the party’s priest tossed his sun rod over the swamp and landed it neatly on the edge of the cottage. Its light was more than enough to light the majority of the battlefield. Several others surveyed the area and turned up nothing. Locke, the Halfling thief, took the opportunity to check out the canoe where he found a bit of coin and a magical belt. In digging about in the canoe however he found a little something more than he had intended and the tiny branches and twigs of the swamp came to life and attacked.

Darkbek, standing at the foot of the fallen tree bridge, found himself flanked by two of them and felt both of their claws. The drow bladesinger and Locke both were attacked but came through it unhurt. The party’s ranger cleared out two of them with a rapid shot, and Darbek smashed one of them into kindling. The party’s new fighter, Mr. E Meat, took this opportunity to hide inside the canoe. I fear that killing his character two sessions in a row might have taken its toll on the player’s bravery.

More creatures emerged from the swamp and attacked the group. The ranger who has spent so much time hiding from enemies at the rear and peppering them with arrows found himself victim of their long reach. The attack pulled him all the way to the edge of the swamp. At the opposite end, another one rose up out of the water and attacked at range but missed. Two other creatures also climbed up out swamp and attacked with vicious claw strikes, which Locke took the blunt of.

Locke scores a bit of revenge and he shifted quickly to rat form and scurried off to hide under the canoe. The drow bladesinger moved up and swung and hit the one with the claws. He followed it up with a forceful bolt of energy that should have sent it flying off into the swamp, but it's roots dug into the ground and kept it locked in place. The lack of movement was enough to mess his plans up for the time being. With a little bit of magic he flipped the canoe over. 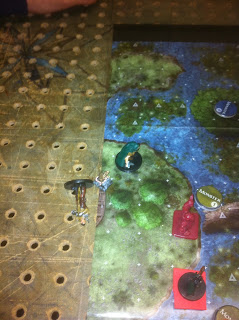 Mr E. Meat had been comfortably hidden away in the canoe and was now both exposed and not alone. The rat scurried around his feet and he had no clue if it was a member of the gang they sought, or just a common rat. He did the only thing a sane and sensible person could, he grabbed the rat by the tail, spun it around and flung it at one of the creatures. This maneuver was deemed the moment of greatness by everyone, and and the expression on the face of poor Locke's player was worth the price of admission.

The ranger tried to break away from the vines that had him trapped and failed. He tried to break it again only this time with his bow and risked an opportunity attack. The attack was true, the tree creatures not his. For this troubles he was dragged out into the swamp and scratched up by the brambles. One of the ones with the claws disappeared back into the swamp water, the other attacked and missed.
Locke scurried up to a creature and surprised it by switching back to Halfling form and attacking. The transformation came as such surprise to the creature he was able get combat advantage and do massive damage to it. To determine surprise I had Locke make an Insight check to see if he could time it right and be in the right position. Then make a nature check to see if his knowledge of plant life was enough to pull it off. He succeed in both checks. I must admit a little disappointment in how the scene was handled by the players, none of them had even seen him turn into a rat and they all just took it in stride.  I'm hopeful that this will come up at the start of the next session.

The drow bladesinger called to him to get out of there but Locke didn't listen. Flames roared out from between his fanned fingers and sprayed across the wooden creatures and Locke a like. The flame was spread even further when it exploded the gasses that had bubbled up from the swamp. It even caught the bladesinger in his own expanded blast. It was clear that the Drow felt no sympathy for Locke and that he still blamed him for the damage he'd suffered in the battle at the bridge. The blast was enough to knock Locke unconscious and kill one of the creatures.

Darbeck tries to cross the log bridge and ends up in the swamp for his troubles. The ranger pulled free at last but fails again to put an arrow into the creature that had him trapped for so much of the battle. The last creature with nasty claws appears beside Darbek and misses his attack. Using their long reach two of the plants keep the creatures at bay; one of them is now dragging the bladesinger further from the group, and the other tries to grab the ranger but misses. So instead he moves up on to the edge of the boathouse and kicks the groups light into the swamp. The sun rod sinks to the bottom of the swamp and takes the group's light with it.

Locke gets himself back in the fight thanks to his closeness to Darbeck and a blessing bestowed by the sun. The light problem is solved when Mr. E. Meat cracks open another sun rod, then he turns his attention to the clawed twig creature that had attack Darbek. Using Darbek as a distraction he hits and kills the creature.

Vines lash out at the Drow bladesinger and snares him. His grasp is short lived when another character drops it. Then the drow races at the remaining creature and slices into it with a staggering blow followed by a bolt of fire. The flames were enough to kill it but left him singed as well.

As a whole it was a bit of a filler encounter in my opinion. It didn't really add a lot to the story, mostly it was a fight on the way to the next part of the story.  I think it could have easily been skipped over and replaced with a skill challenge encounter that had the group making their way through Blacklake to search for the Dead Rat's hide out.  That isn't normally the way of Encounters however so you have to work with what you have and make the most out of the Encounter you are given.  In the end despite being filler it was still a fun Encounter and I think the players enjoyed it.

The twitter effects were interesting. I have to say I'm glad that I live in a place where I get to see them well in advance and can to an extent pick and choice the ones I like.  Tonight for example the explosive properties of the swamp gas played a massive role. Keep up the great Twitter effect Wotc, just keep focus on the ones that are based on environmental aspects of the encounter, as opposed to the ones that just say the PC get the advantaged for no apparent reason.

Be back next week with Encounter 8. for now however I have to get ready for Play a New RPG Month, coming in October, watch for a post with my top five suggestions for games coming later this week.
Posted by Randilin Trouple at 1:12 PM