Star Wars Edge of the Empire: Mask of the Pirate Queen
Characters in attendance:

(Names and descriptions are my own from memory, I don't have the sheets with me)
One of the rules with RPG Night with Cliff games is that if a player isn't at a given game it is assumed that their character just fades to the background and hangs around with the characters without experiencing any of the danger or being able to assist the characters in any way.  While it is more than a little unrealistic it is the best solution for a rotating player base.

The players have arrived Black Wind crater and dealt with what remained of a squadron of clone troopers that had been assigned to guard the base.  They may have been able to talk their way through the encounter had one of the group's droids not been built out of the body of an old super destroyer battle droid.


Arriving at the research station the group was a more than a little nervous about a pair of turreted blaster cannons that looked out over a large 50-meter wide kill zone that surrounded the main blast doors that lead into the research station.  Daltron 3030 dressed in his new acquired clone armor made his way across the cleared kill zone, without being killed and then a few other group member followed suit.  Those that made their way across in the second group pretended to be prisoners in case anyone was watching.

Heb the groups Jawa engineer and slicer made quick work of the main door and sliced it open without setting off any alarms and even opened the door soundlessly (Triumph). Another door was sealed at the end of the corridor.  Jek Spectro called out to the empty corridor "Hello?" A poor pirate who was down one of the side corridors poked his head out to reply and was burned down by the two Dugs and Deltron3030 in a hail of laser fire.  Afterwards, Heb sliced open the second door (Double Triumph) and was able to determine the codes that would control any of the doors in the pirate's base (Aka the Research facility) for his efforts a pirate stationed in one of the unexplored passageways blasted Heb.  At that point, the lights in the station went from normal lighting to a red alert lighting.

The rest of the group entered the facility and split into three prongs; the first took out the pirate that had shot Heb, the second group check out the unexplored corridor and ended up capturing a pirate while the final group head into the new corridor.  They encountered a group of pirates in one of the bases two barracks preparing to fight.  They were far from prepared and no match for the group.  From the opposite end of the hall, a couple of pirates did get off a few surprise shots at the group.  Heb was able to make use of his new-found control of the bases doors to shut and lock the pirates in the room.

We ended the game there for the night, a picture was taken of the Battle Map and the destiny pool.  Next week we will be continuing from where we left off. 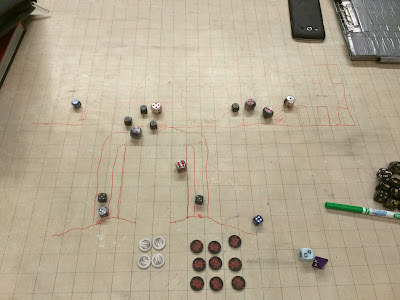 Posted by Randilin Trouple at 2:31 PM