Star Wars Edge of the Empire: Mask of the Pirate Queen
Characters in attendance:

(Names and descriptions are my own from memory, I don't have the sheets with me) 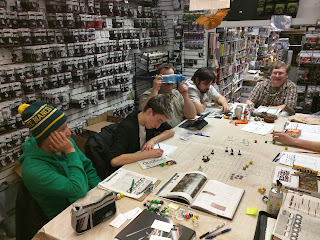 Tonight's session of RPG Night with Cliff picked up exactly where the last weeks had ended.  The Destiny pool was restored from the previous week as well.  The only major change between the two weeks is in the characters that were there.  A few players had to miss the game this week due to illness, and prior commitments.

It was an odd night overall when it comes to dice rolls.  A lot of blank faces came up for people all around the table.  It affected both PCs and NPCs alike and resulted in some funny moments.

Initially, there was some confusion about what the group would do next. Some felt they should clear the pirates out of the other barracks that had been locked down before moving on.  Others wanted to push on and leave them locked up.  That group won out in the end.
Lewie did a quick search of the barracks that he been cleared out of pirates but came up empty.  TBA77, the groups medical IG unit offered healing to some of the fresh wounds suffered by the group while Heb focused on some quick repairs to the droids.  While Deltron3030 crept forward down the main corridor in hopes of surprising anyone who might be waiting around the corner.
Jak and Shaga'thorn questioned and interrogated the captured pirate.  Their technic was an odd mix of threats of physical violence and more traditional negotiation.  The pirate seemed more afraid of the Pirate Queen then he was of the party members with blasters pointed at him.  That fear wasn't enough to stop him from spilling the beans that she was in the base and could likely be found on the second floor in the comm centre.  He was thanked for sharing that information by Shaga'thorn with a stun blast.  [GM's comment: he was lucky it was Shaga'thorn most of the group seems unaware that their blasters have stun settings.] 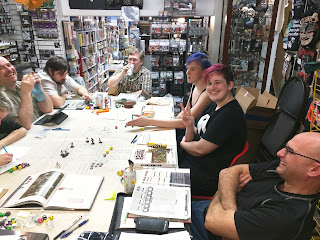 Heb did what Heb does best and ignored the combat (Unless there is a droid he can shoot with his Demp gun he isn't interested) in favor of slicing information out of the base's security system.  He already had total control of the bases doors within a limited range.  Now he went after floor plans and came up with a map of the main floor.
When Deltron3030 [remember not a droid] rounded the corner at the end of short all he was greeted by three pirates who were about to come around the corner themselves and attack. In doing so he also discovered the location of the final room and the elevator to the second floor.   It was a very Han Solo running into a room of Stormtroopers moment. Sadly for him, he had used his actions in rounding the corner and the pirates were about to get off the first shot.  [A group of minions can certainly be harmful to a characters health.]
Macro the super destroyer styled battle droid rushed to Deltron's aid and round the corner with his newly acquired light repeating blaster and opened fire.    This was one of those wonderful moments when the dice came up mostly blank.   The poor droid was not prepared for the recoil of such a large weapon and his fire splashed across the ceiling.
Shaga'thorn was alone with the stunned prisoner after Jek had rushed off to joining the fighting.  He took the time to perform a strip search of the prison and discovered a commlink hidden on his person.  He turned it on to listen to the base chatter and learned that the group was being monitored and that reinforcements were on the way down.  Which promoted Heb to lock down the elevator.
Deltron3030 took a successful parting shot before pulling back to the groups medical droid.  Lewie and A.C.E. attacked the group from the opposite hallway pinning the pirates between 2 groups of PCs.  Lewie attack swung wide [His attack role also came up all blank]  A.C.E., on the other hand, proved himself somewhat valuable in combat and killed one of the minions.
The last remaining pirate pulled back into the bases rec room.  He hoped to lead the PC's into an ambush from the pirates he knew were waiting inside.  It only sort of worked, the PCs blasted him down before he got too far into the room.  The person who killed him had a triumph that he used to declare he was noticing something out of the ordinary in the Rec room which gave away the pirates ambush positions.
Two pairs of pirates opened up from opposite corners of the room.  One of the groups shots went very wide while the other group missed the PCs but blasted apart the a counter top covered in alcohol starting a small fire right in the door which hindered the groups access to the room.  Macro the destroyer droid moved through the flames, ignoring the damage that it caused and opened fire with the light repeating blaster again.  This time, around the other members of the team, had boosted Macro so when he spray fired at the pirates behind the bar he was able to take them both out.  Lewie rushed across the rec room and took out one of the two pirates and disarmed the other.  Another party member took down the last one.
We closed out the game for the night with Heb having taken control of the elevator.
Posted by Randilin Trouple at 8:42 PM