Star Wars Edge of the Empire: Mask of the Pirate Queen
If you are planning to play this adventure you may wish to avoid reading these reports as they will contain spoilers.

(Names and descriptions are my own from memory, I don't have the sheets with me)
RPG Night with Cliff Update March 30th

The group was called back to Paradise, the bar where they had originally met their employer.  Their reception was very different this time around.  Venlana, the Zann Consortium contact was clearly under some amount of pressure to get this situation handled.  She skipped over the pleasantries this time around and got right down to business.

The consortium technicians have been able to trace the last signal they received from the Veiled Sority.  The signal came from the planet Ord Mantell.  There seemed to be no question on the part of the group that they would continue to hunt for the Queen. In fact they didn't even push for more money, they only pushed for more money upfront.  Venlana agreed to cover the groups docking and refueling fees as well as advance everyone 1,000 credits.  She also advised them that information had been sent to a local agent who would help them on planet.

Once the negotiations were completed a the rest of the first hour of game was spent shopping and restocking for their trip and future adventure.  One thing that was noting as it was outside of the normally shopping is the group did visit a local ship junk yard to find materials that would help them to set up a small sick berth on the ship.

The trip to Ord Mantell was uneventful.  TBA took the time to look after some lingering injuries the group had received during the battle in the pirates layer.  Ord Mantell traffic control directed them to a docking berth when they landed and made contact with their their local connection.  Jander, is a brisk, unpleasant Toydarian who apparently has enough contacts on the planet to make his demeanor worth putting up with.

Jander informed the group that he had touched base with a few of his local contacts and found someone who would likely have a line on where to find the pirate queen.  Illo Vandin lives in the high security Jewel sector of the city, the group would need passes to access it, which Jander would have waiting for them near the gate.

Some in the group recognized the name Illo Vandin He is well known on the gambling circuit as someone who had come from nothing to make a name for himself.  Now a days he is well off and acts as something of a promoter for various gambling events.

A quick cab ride took them through the city of Worlport and dropped them off at one of the gates that leads into the Jewel sector.  Armored security guards stood at the gate inspecting anyone who entered the sector. 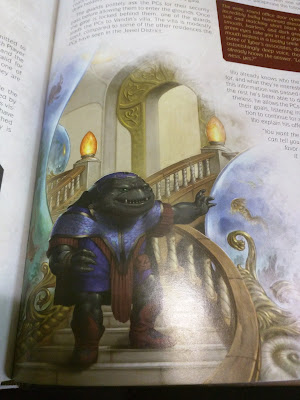 True to his word Jander had a man wait for the group near the gate.  He provided the group with the passes that they need to enter the high security of the Jewel Sector.  The passes would get them through but not without some amount of attention from the security guards.  Jak Spectro was caught with some blaster blue, a known street drug. A few credits along with taking the blue was enough to grease the  palms of the guards and get passed.

Illo Vandin home was guarded by two men at its own gate, openly armed with blasters.  His home was more of an aquarium and the man himself was literally a whale of man or to be more precise a Helgric of a man.  The seemed to already have a sense of what the group was there to discuss and what it is that they wanted.  He told the group that he would give them the information that they wanted if they would do one little job for him.  He was even generous enough to give them their chose of possible jobs that they could do for him.  Fix a fight, or deliver a package.  There was a bit of discussion about which one to take Macro, the Battle droid, wanted to fix the fight.  In the end they decided that they would take is package to where he wanted it. I guess they felt it would be the easier of the two jobs, only time will tell.

Posted by Randilin Trouple at 10:00 PM